Pulstech OÜ (LLC) is an Estonian (EU) based private company initiated to develop and implement the ideas and technology worked out and patented by our co-owner
Prof. Vladimir Zakhmatov.
Our vision is to create a safer world by introducing a new generation of fire-fighting and environment-saving products based on impulse technology. 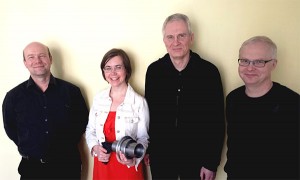 The story of Pulstech LLC (OÜ) begins in 2003 in Ukraine with an unplanned meeting between Ardo Pärna, our Marketing Director, and prof. Vladimir Zakhmatov, our chief scientist. During a working trip to Odessa, Ardo´s local friends connected the two, hoping that their common interest in science would spark worthwile discussions. So it went. Vladimir began to explain his background as an ammunition and firefighting technologies expert, who had been employed several times by the Soviet and Ukrainian military structure. Working daily with hazardous materials and sensitive technologies, he was personally exposed to the needs (or, to be precise – lacks) in fire-safety. The contemporary extinguishing methods were slow, ineffective and often, clumsy. With his and his colleagues´ lives at stake, prof. Zakhmatov was “inspired” to work out a way to deal with these challenges. Ironically, it was his unique and in-depth knowledge of explosives and ammunition that lend him the genius to create the effective opposite to their regular purpose – a new highly effective method of fire extinguishing. In notable timing, there soon arose a severe crisis and need for highly efficient fire-fighting techniques – the nuclear catastrophe of Chernobyl (1986). The inventions and devices of Prof. Zakhmatov proved their effectiveness, saved many lives and prevented an even bigger catastrophe, which could have occurred if the highly contaminated and fire-dry bush and forests in the area had caught fire. It is symbolic that two of his firefighting vehicles are patrolling the area until today. After thorough discussions, Ardo realized the potential of the technology and started to ponder over a joint project. Vladimir, in turn, was looking for a team to help develop and commercialize his inventions, therefore there seemed to be a mutual appeal. The two agreed that Ardo will spread the word in his circles to see if there would be interest. Inspired, Ardo returned home to share his discoveries with friends and companions. For many, it seemed “too good to be true”, but there were also some that believed in its potential. In the following years, Vladimir delved deeply into the academic world, focusing his energy on scientific problems. He also gained several international acknowledgements, dozens of presentations in the gatherings of academic fire-safety experts, gave some few hundreds lectures in various universities. Finally, pushed by the realities brought about by the Ukrainan crisis, Vladimir finally made a decision to cooperate with his friends in Estonia. By that time, the team was complemented with two valuable forces – Allan, a seasoned corporate banker and business consultant took up the role of CEO, and Kalle, Secretary-General of the Estonian Inventor´s Association, an engineering and technology expert, became the R&D Manager. In the fall of 2014 PulsTech LLC (OÜ) was established and launched the team to hard work with the business arrangement and creation of the first hand extinguisher prototype. Many relations with potential partners were created, and a plan was worked out to begin serial production of some products in the Czech Republic. As far as our scope and perspectives are developing, so are the strength and the determination of our team, and the trust of our partners.

Copyright 2018 by PulsTech. all rights reserved.